The Next Big Trend: Farming In Your Supermarket

The Next Big Trend: Farming In Your Supermarket

Tiny vertical farms are making a huge impact on the future of sustainable agriculture.

INFARM is revolutionizing the world of fresh grocery shopping with the introduction of minuscule vertical farms in supermarkets. Not only do these farms display the produce, but they actually grow crops in-house. This space-efficient method of production could potentially alter the future of small green businesses, allowing for the growth and harvesting of crops onsite. While larger scale versions of this urban model may not be a universally feasible option, INFARM aims to make their technology more accessible by scaling down the overall size. 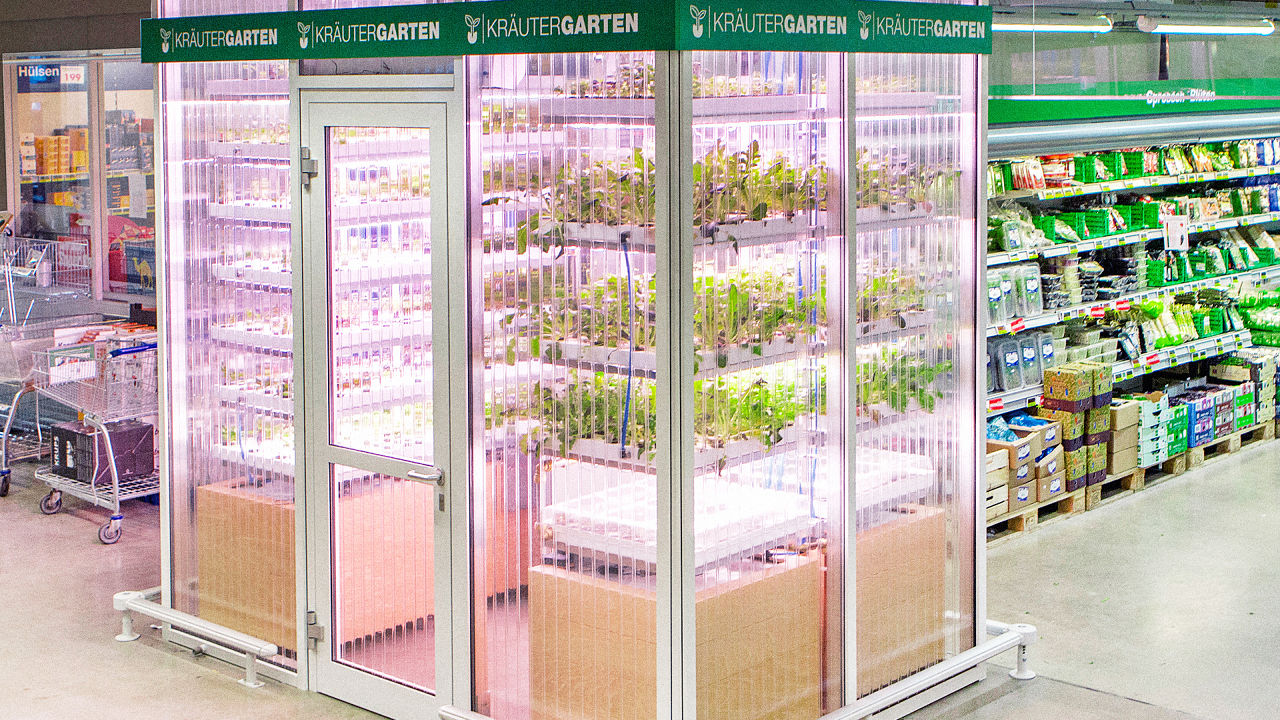 Based on the concept of “farming as a service”, INFARM has implemented a micro-scale crop of herbs at a Berlin METRO supermarket. Dubbed Krauter Garten (or herb garden), the hydroponic system relies on stacked units of planters and large LED lights to mimic natural sunlight conditions. Microsensors monitor the environmental facets and make adjustments to produce the most optimal growing conditions for the plants. Employees can control the various conditions of the greenhouse with an app, thus making monitoring intuitive and user-friendly. The vertical greenhouses also actually take up less space than a standard produce display and allow for shoppers to pick their own freshly harvested herbs and greens right in store.

The greenhouses are not just restricted to herbs and leafy greens, however; each may be configured to grow other crops such as peppers or tomatoes. Further development may even result in a wider range of produce offered in the future. With a vertical construction, the minuscule greenhouses are designed to maximize space and allow for a multitude of crops to grow even in the smallest of locations. The ultimate goal, as INFARM states, is to produce “a future where cities become self-sufficient in their food production, where autonomous farms grow fresh premium produce at affordable prices, eliminating waste and environmental impact.”

When considering the high levels of spoilage and waste that is produced by retail supermarkets, as well as the costly expenditure of transporting crops to urban locations, the option of growing at least a fraction of the produce in-house arguably provides a significant enough benefit for both stores and customers that it should be pursued more widely. INFARM may even see an increase if this technology is extended to restaurants or retreat centers that focus on a farm-to-fork mentality.

As a company, INFARM has established itself as a frontrunner in the shift towards indoor urban farming. An origami-inspired microgarden project launched several years ago has since progressed to what the company states as “a perfect synergy between hardware and software, creating far greater production efficiency than any other technology on the market.” The company hopes that the success of the pilot in Berlin will allow for further manufacturing and implementation in more businesses by the end of this year.